Entering Vari Hall from the Ross-Vari link, you might think something is wrong with the artwork hanging on the wall at the entrance to the rotunda. The large-scale photograph of a magnificently aged tree is upside down. The expansive branches, denuded of leaves, float above the bottom of the frame, while the trunk, anchored to a blighted strip of grass, appears suspended from above. Even the house situated nearby is upended. A topsy-turvy portrait of documented reality, the picture makes you look twice and wonder what you are seeing. Which is precisely the point.

Created by Rodney Graham, the internationally acclaimed Canadian multimedia artist who died in October of 2022, the grey-toned chromogenic print is meant to challenge perceptions. As indicated by its title, Welsh Oak is a picture of a tree. But it’s also a concept, a symbol, an act of interpretation that’s suggestive of complex root systems, mortality, ancient wisdom and the landscape tradition in visual art. Meaning is deliberately ambiguous, making it one of the most provocative – and coveted – artworks in York’s permanent collection.

“It implicitly asks students, faculty and visitors to consider how we know what we know, and the always mediated ways we observe the world around us,” says art historian Gabrielle Moser (MA ’09, PhD ’14), a photography expert who teaches courses in aesthetics at the Faculty of Education. “Rodney Graham’s work always was about playing with human perception and how we see, often doubling, inverting or mirroring recognizable stories to make them strange.” 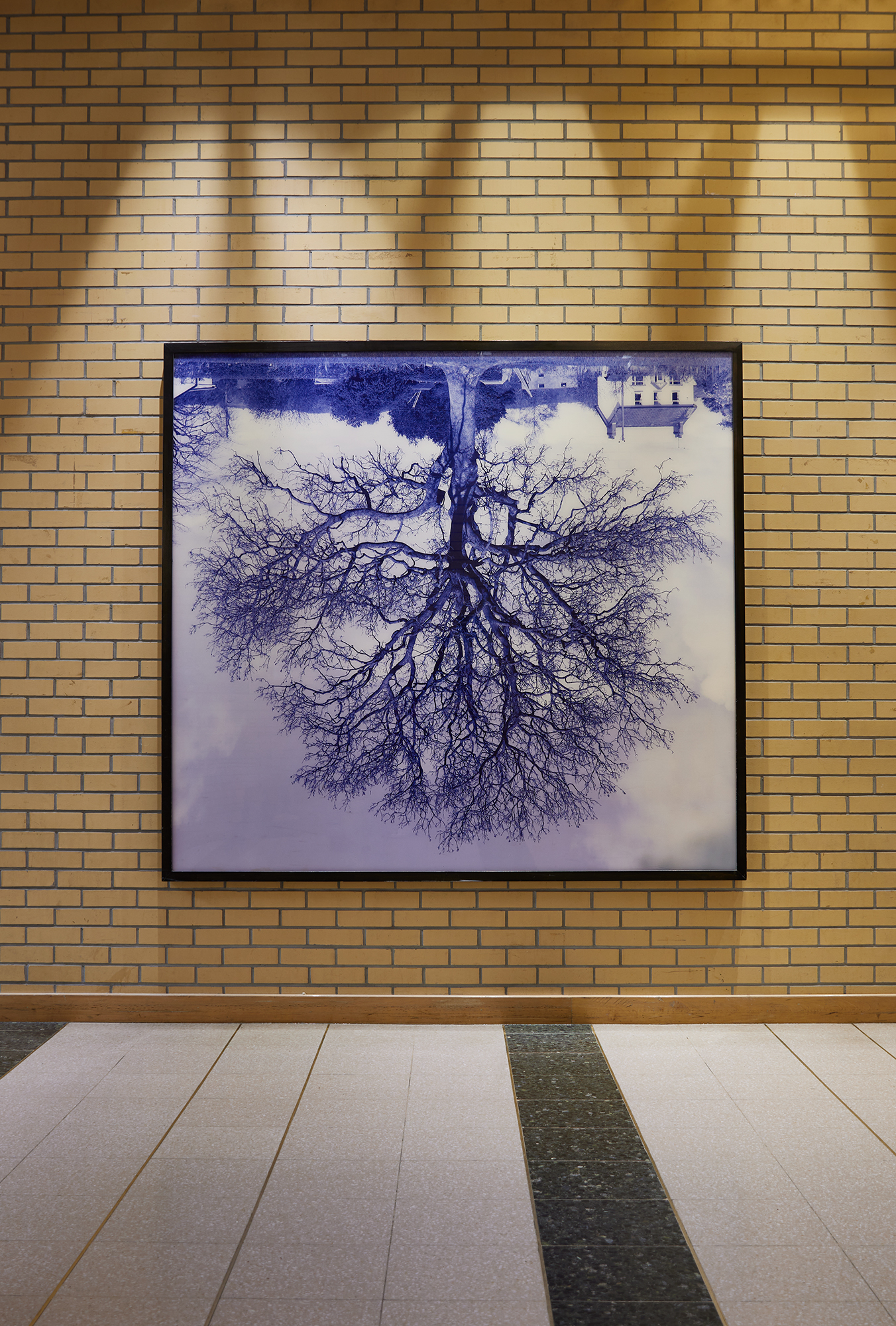 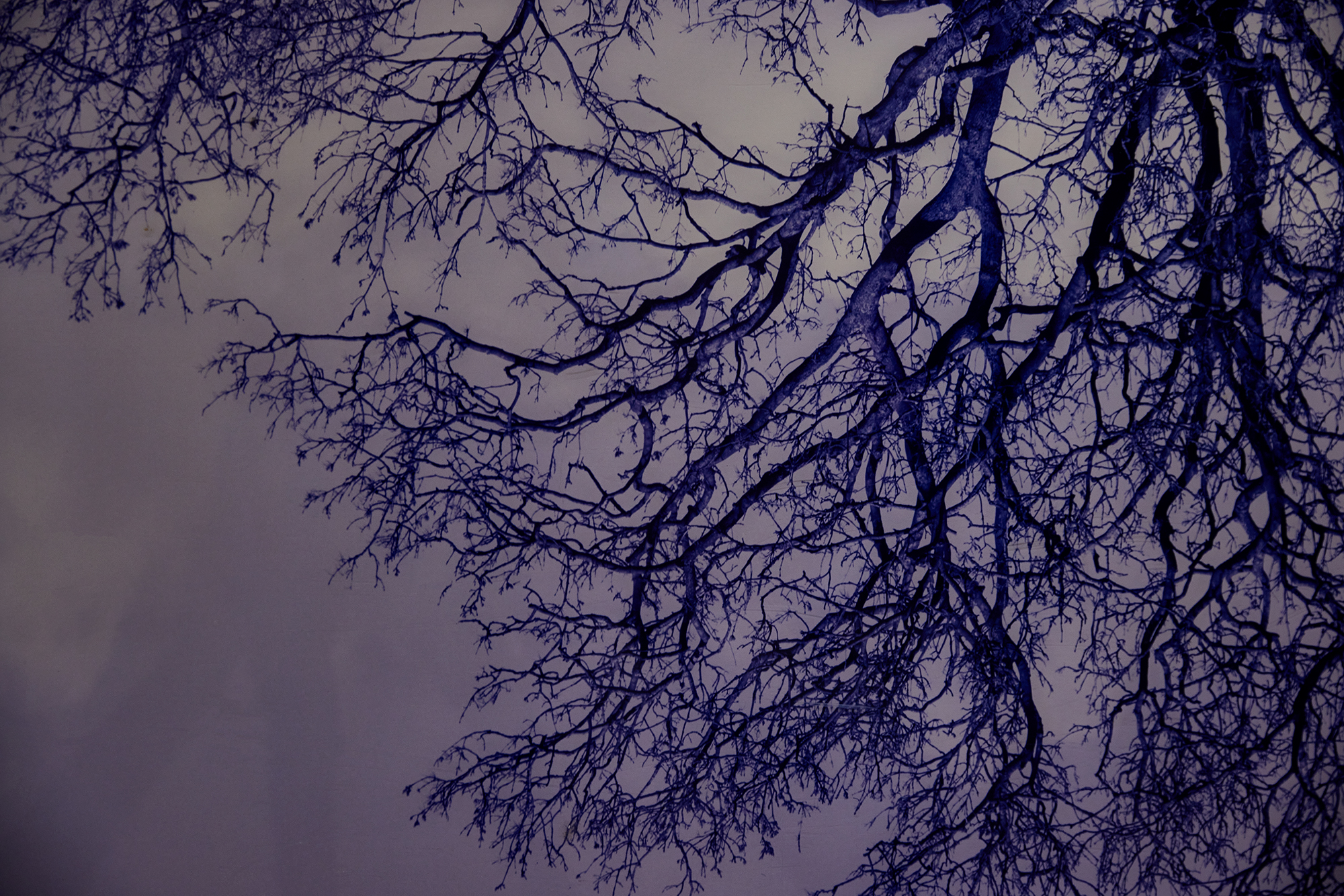 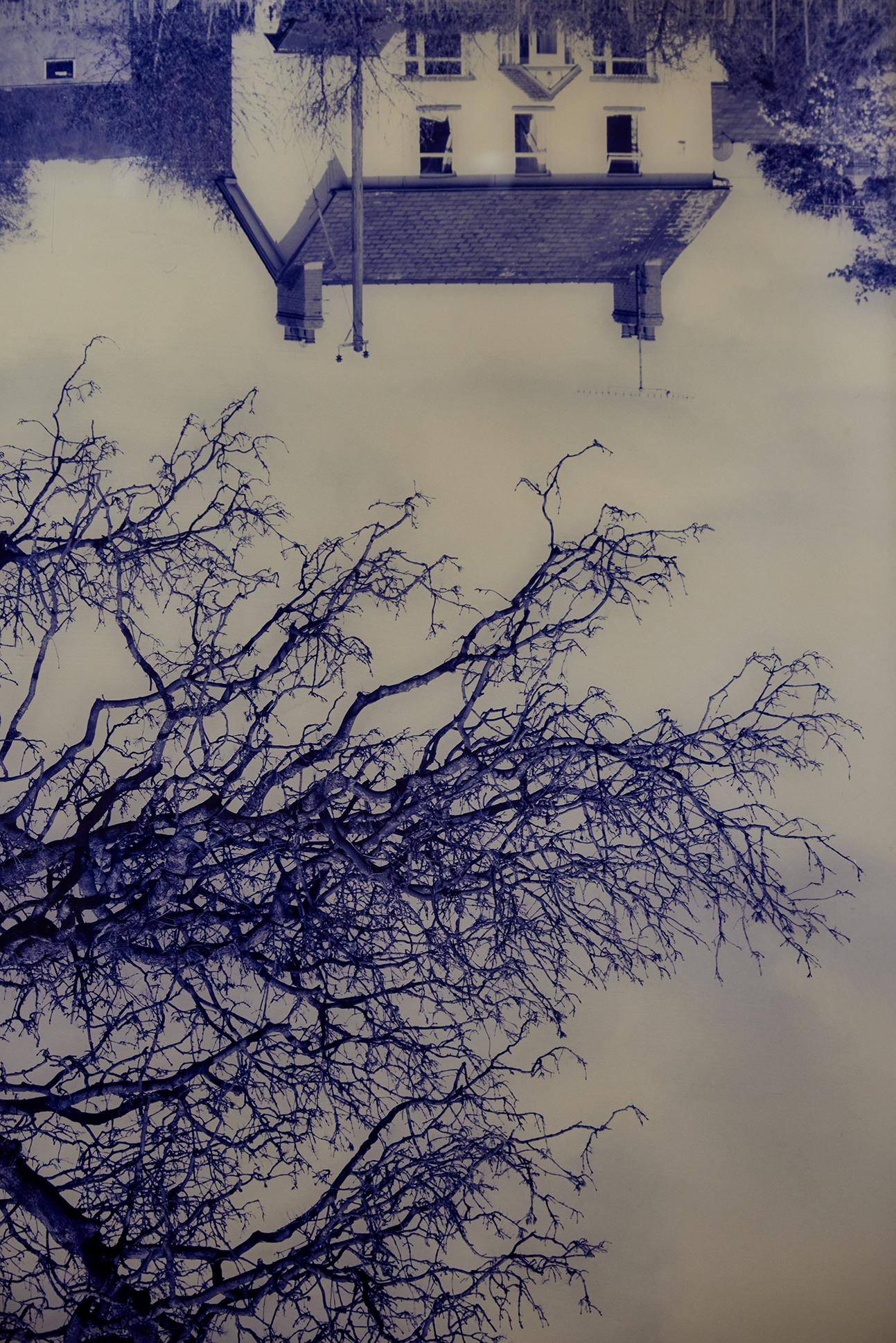 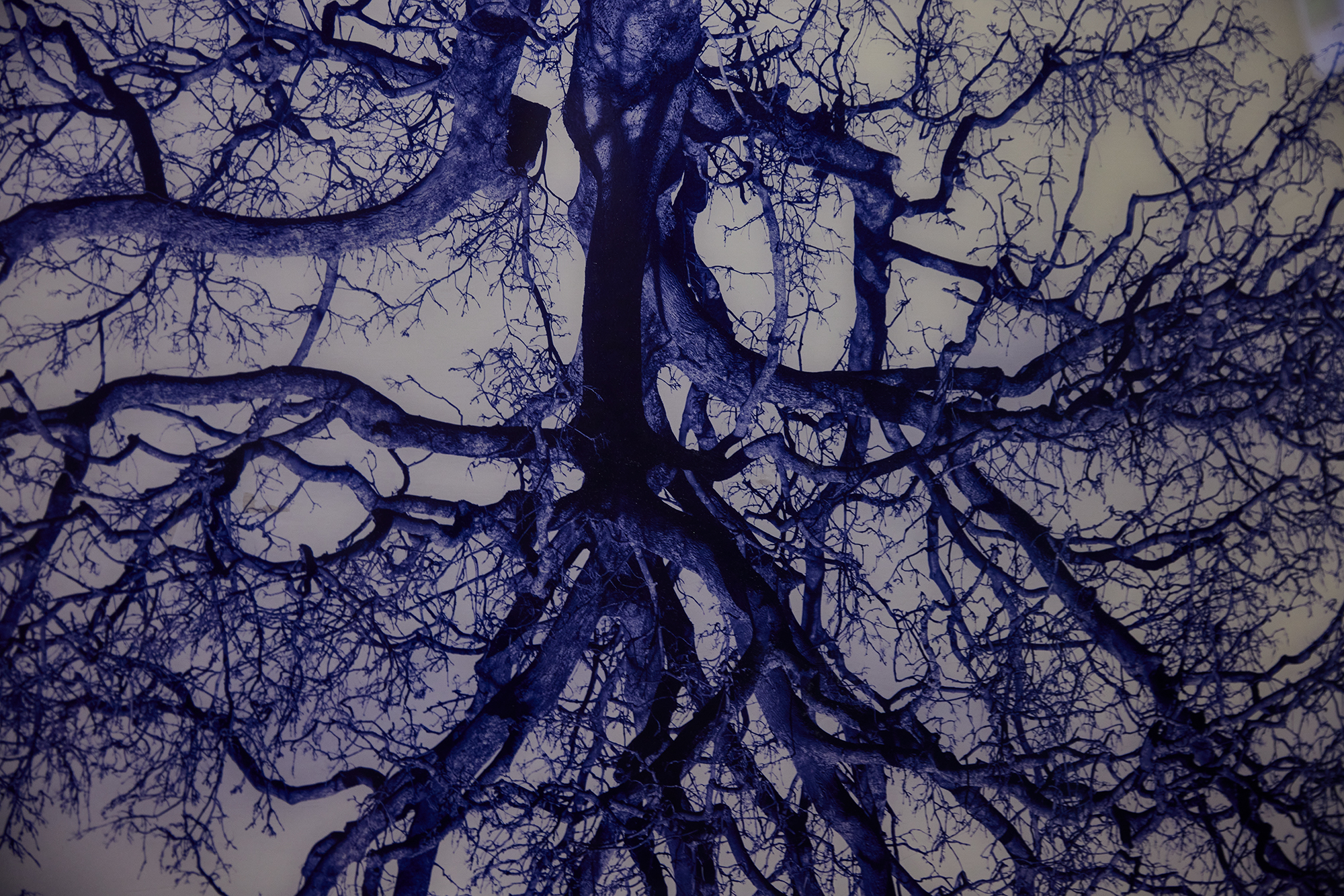 A gift from York benefactor Lou (Bud) Odette, Welsh Oak has been turning heads since its arrival at the University in 1999. Graham had created it the year before as part of a sequence of upside-down tree portraits using contemporary photography technology to simulate the optical effects of the camera obscura. A precursor of today’s film-less camera, a camera obscura is a round building with a mirror at the apex of its roof that allows for upturned images of the outside world to be projected inside, for scientific study and artistic duplication. Interestingly, this is also how our human eyes work, registering an image upside down on our retinas, which our brains then correct. Master painters such as Leonardo da Vinci and Johannes Vermeer, who employed the camera obscura as a drawing aid, used prisms to view their projected images right-side up. But here, Graham leaves them inverted, asking us to reexamine how we consume and digest visual information.

“You don’t have to delve very deeply into modern physics to realize that the scientific view holds that the world is really not as it appears,” said Graham in a 2005 interview. “Before the brain rights it, the eye sees a tree upside down in the same way it appears on the glass back of the large format field camera I use.”

Graham’s conceptual investigations into the fundamentals of perception, the camera obscura in particular, established his reputation as a contemporary artist of note. Born in 1949 in Abbotsford, B.C., he studied under the tutelage of the renowned Canadian artist Jeff Wall, emerging in the late 1970s as a member of Wall’s nascent Vancouver School of photo-conceptualists. The two also performed together in the West Coast punk band UJ3RK5 (pronounced ‘you jerk’ – the 5 is silent), an influence on former York art student Kim Gordon, of Sonic Youth fame. Graham’s first camera obscura experiments date from around this time.

According to a published catalogue essay, they began in 1979, when Graham built a walk-in camera obscura in a farmer’s field close to his home in B.C., inviting members of the public in to view an inverted tree image reflected on a rear wall. By the 1980s, Graham had abandoned his elaborate camera obscura structure in favour of an 8 x 10 field camera, which he used to shoot images of trees while in Belgium. In 1990, he travelled to the British countryside to photograph more upside-down tree portraits. He returned again eight years later to shoot what became the Welsh Oaks series, considered by many to be his definitive work on the theme. The upside-down trees made him art-world famous.

“Graham’s inverted trees, whether smooth and dome-shaped or diseased and scraggly, project much more than the mere facts of their existence,” wrote Andy Grundberg in a 1990 New York Times review that attempted to explain their paradoxical allure. “They have an abstract side that allows one to see them as totems or phalluses, and they have particular identities as noble survivors in a topsy-turvy natural world.”

He was truly fascinated by the strangeness of the world, its sheer disorder

That critic was right. Graham did intend his upside-down trees to be symbolic. But he had other ideas in mind. “I created an inverted tree,” he said in a 1992 interview, “because I wanted to talk about man’s skewed relationship with nature inside a functional architectural space in the middle of a landscape.”

His fascination with nature, and humanity’s relationship to it, led Graham to participate in a 1991 group show at the Art Gallery of York University (AGYU) involving various artists invited to create work specific to a location of their choosing on the Keele Campus. Drawn to the farmland landscape that once surrounded York before its development as an urban university, Graham proposed to do an installation piece using an old tree unearthed in front of the Ross Building to make way for a new project. White Oak Trunk Unearthed During the Construction of the Common presented the uprooted tree as a piece of found sculpture, inviting spectators to watch it decompose. Art critic Christopher Hume (BA ’73), writing in the Toronto Star, said the work signified “a simple yet eloquent comment on the history and destruction of the site. Mounted on an unadorned concrete base, it neatly sums up the damage done when man intervenes in the landscape.” 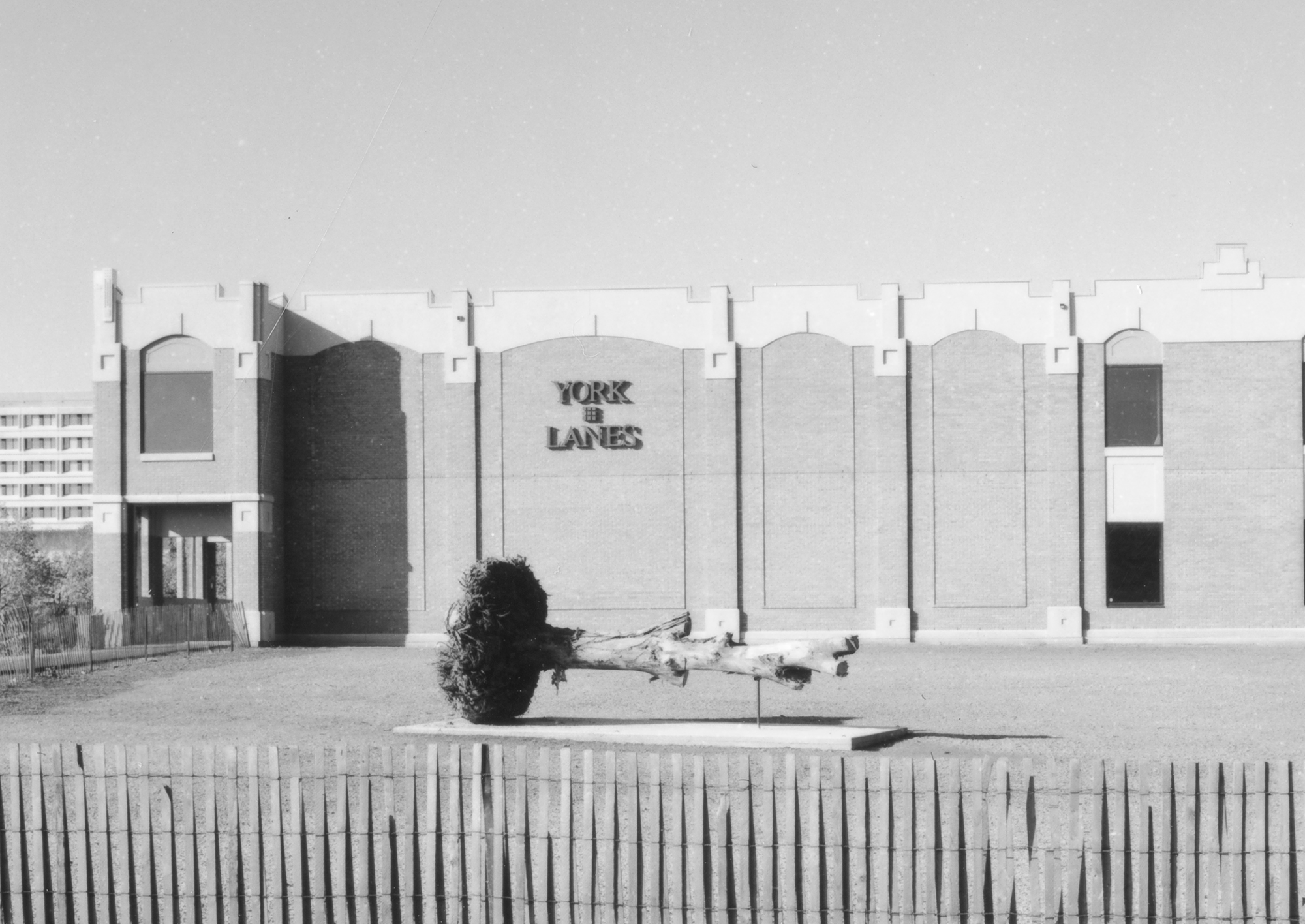 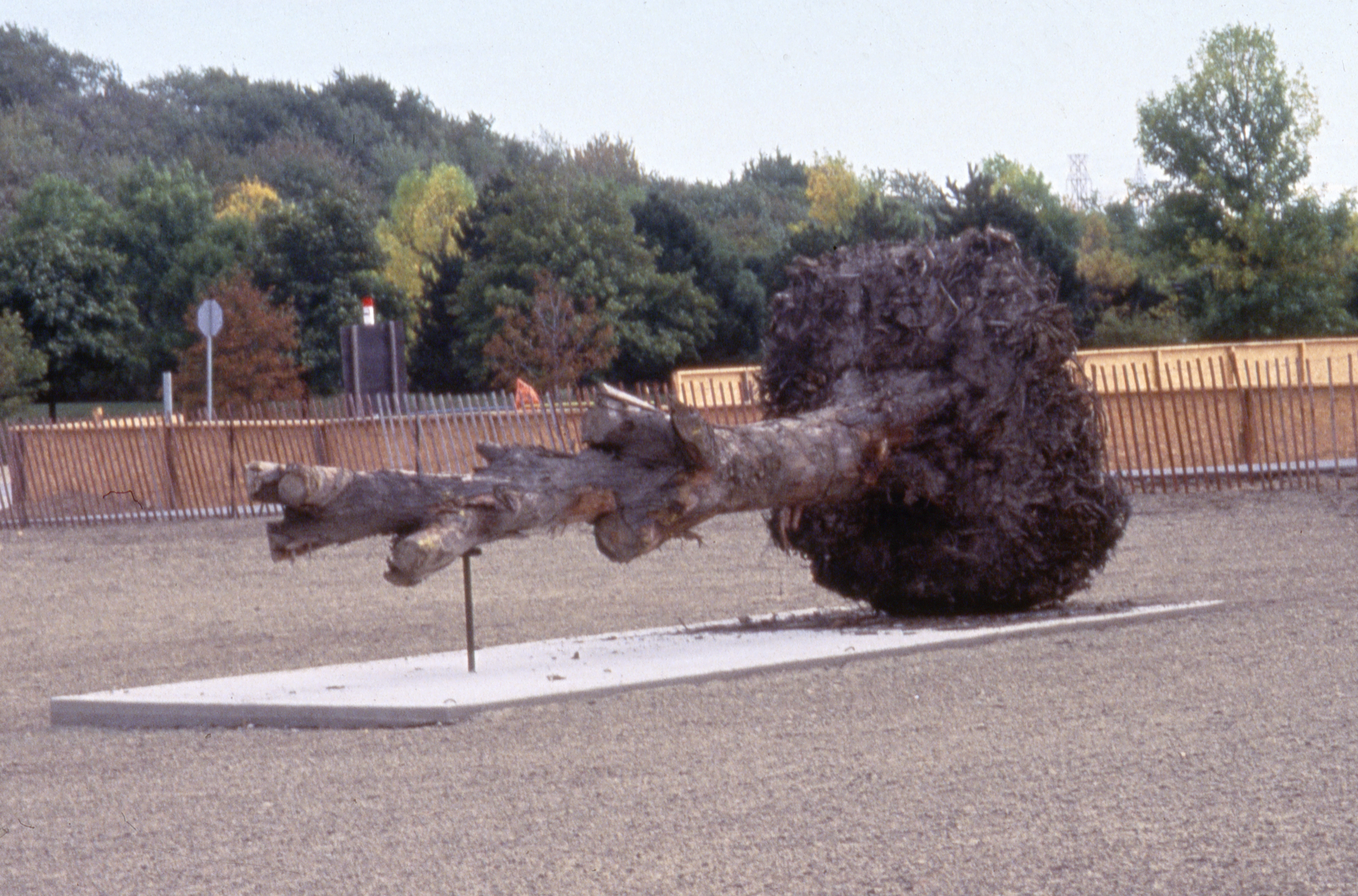 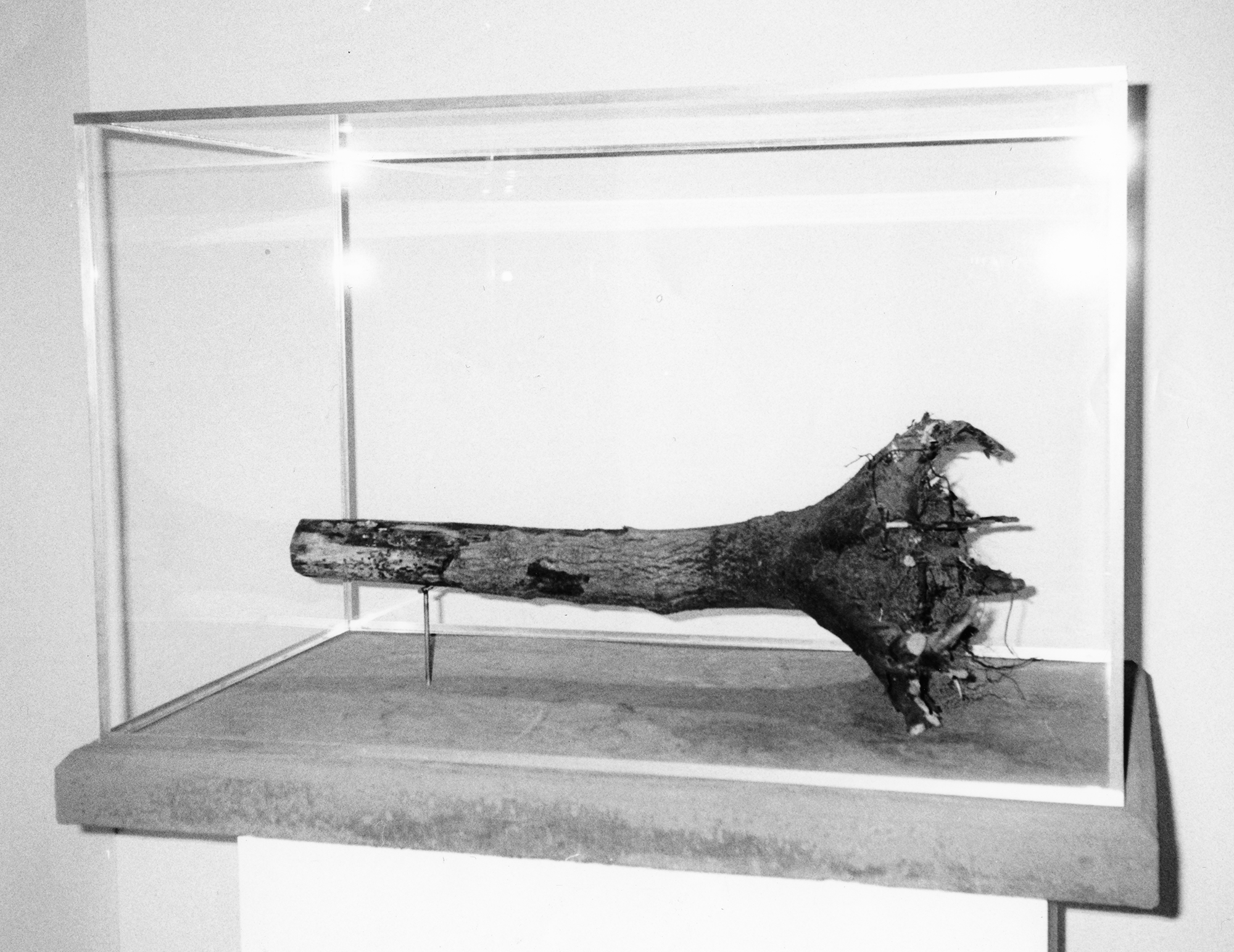 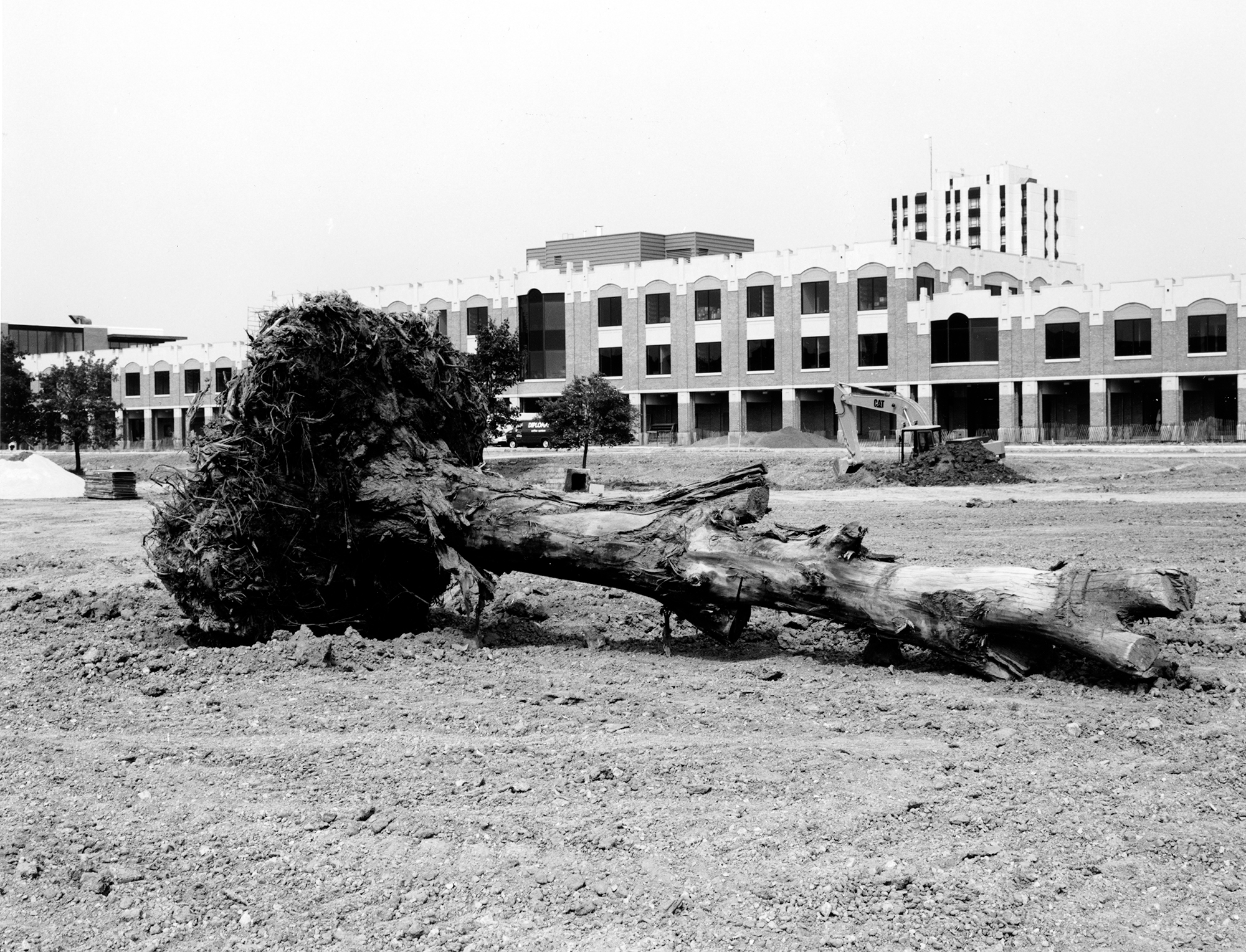 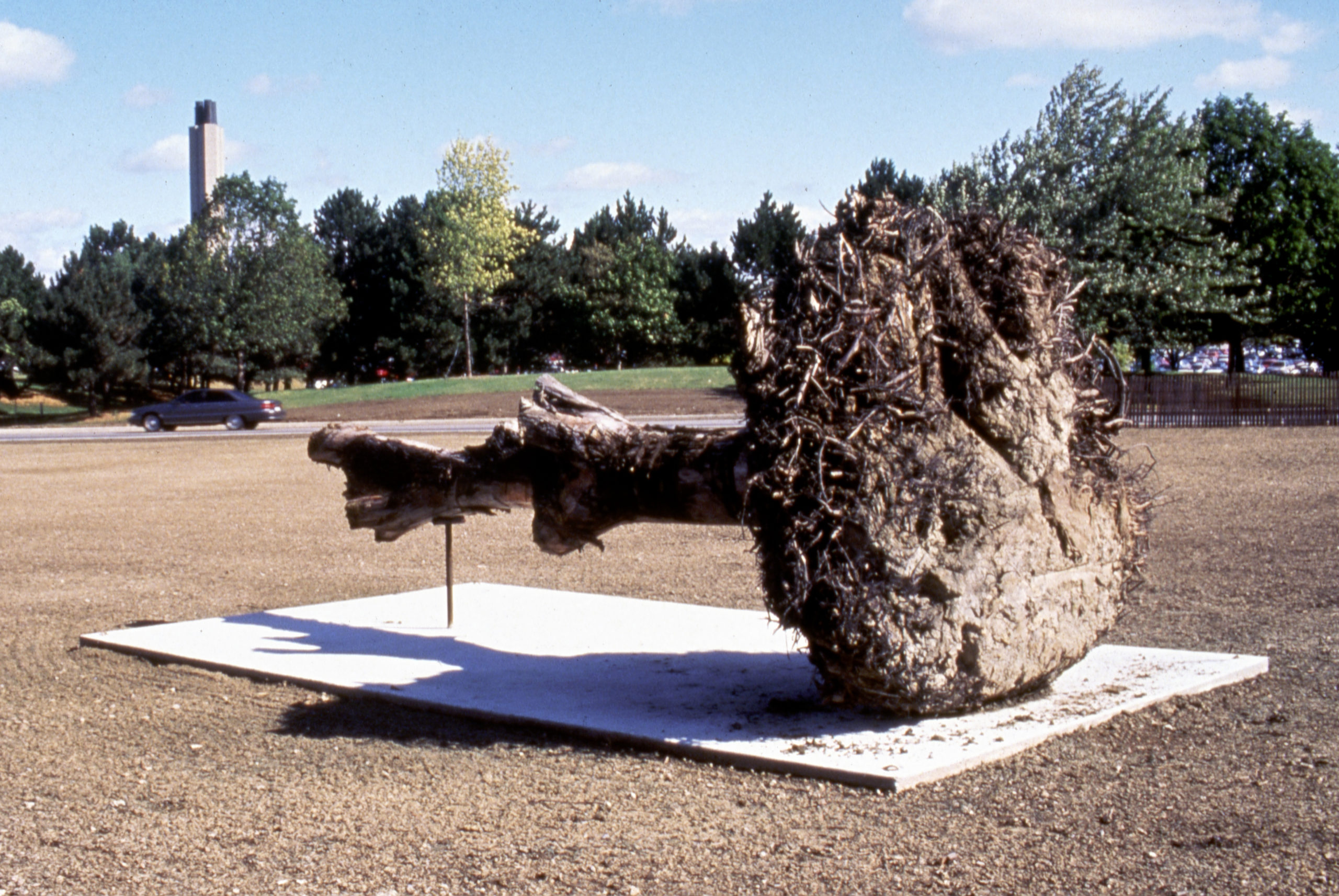 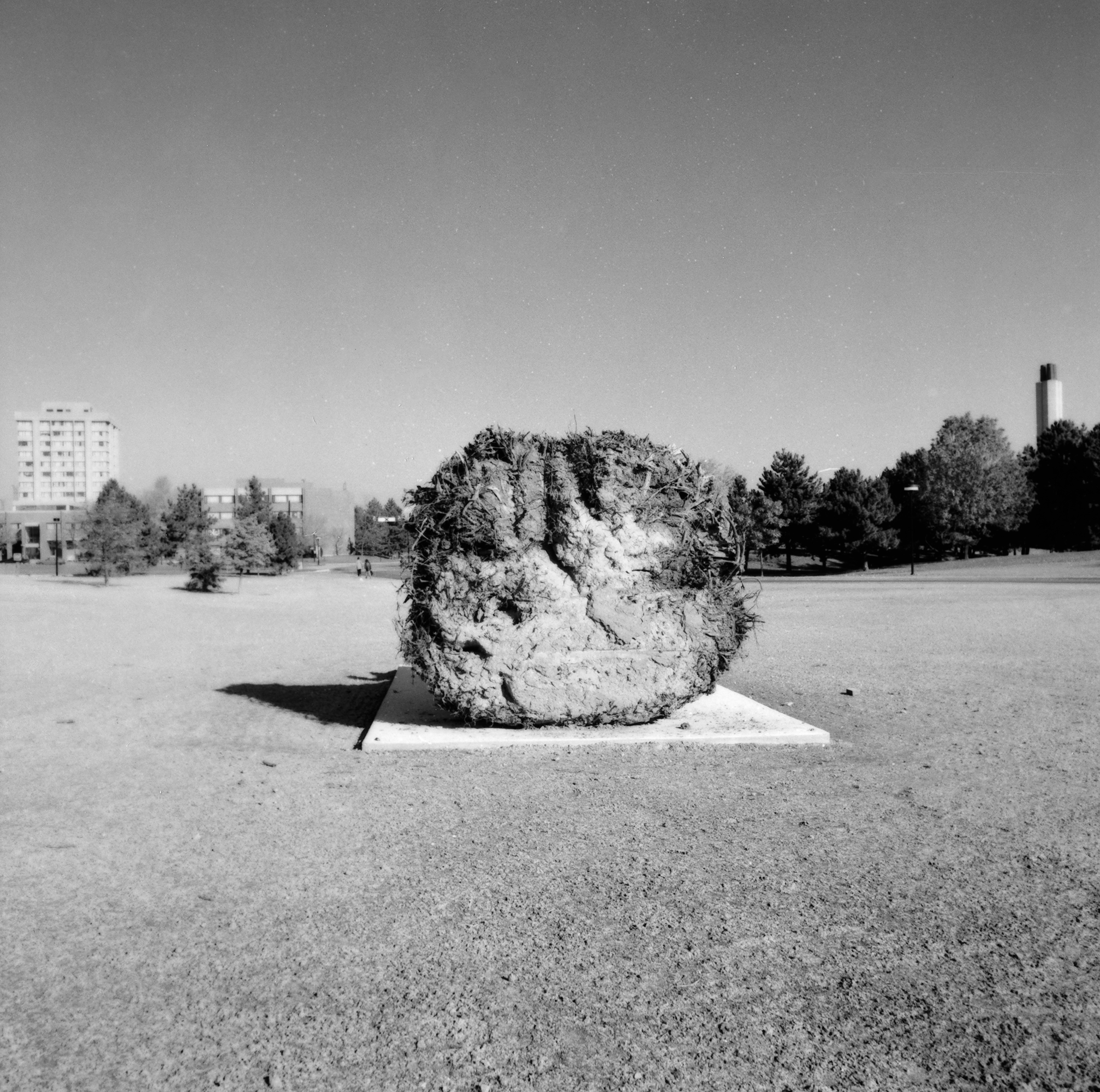 The work no longer exists, having been allowed to dissolve completely back into the earth from where it originally came. But others, also linked to the University, remain. Taken together they represent the breadth and variety of Graham’s creative output, from photography and sculpture to music and work on film. As an artist, Graham “was filled with wonder,” says the AGYU’s director and curator, Jenifer Papararo. “He was truly fascinated by the strangeness of the world, its sheer disorder, and the oddity of those who lived in it.”

I felt I had to do something different, something more conceptual

In 1994, Graham returned to York with an AGYU solo show that included the debut of School of Velocity, a contemplative work based on Carl Czerny’s musical exercises for piano and Galileo’s time-squared theorem, which measures the velocity of a free-falling object. Four years later, he was back again, this time with an exhibition of short films and videos. Chief among them was Vexation Island, a breakthrough work that the AGYU commissioned Graham to create as Canada’s representative at the 47th Venice Biennale. The continuously looping 35 mm film features a dozing pirate (Graham in costume) with a gashed forehead who wakes to find himself stranded on a desert isle, only to be knocked unconscious again by a falling coconut. An existentialist farce, it represents life as a ludicrous Sisyphean struggle. The Village Voice called it an “agent of cosmic mystery as well as comic relief,” setting Graham up for even more praise. 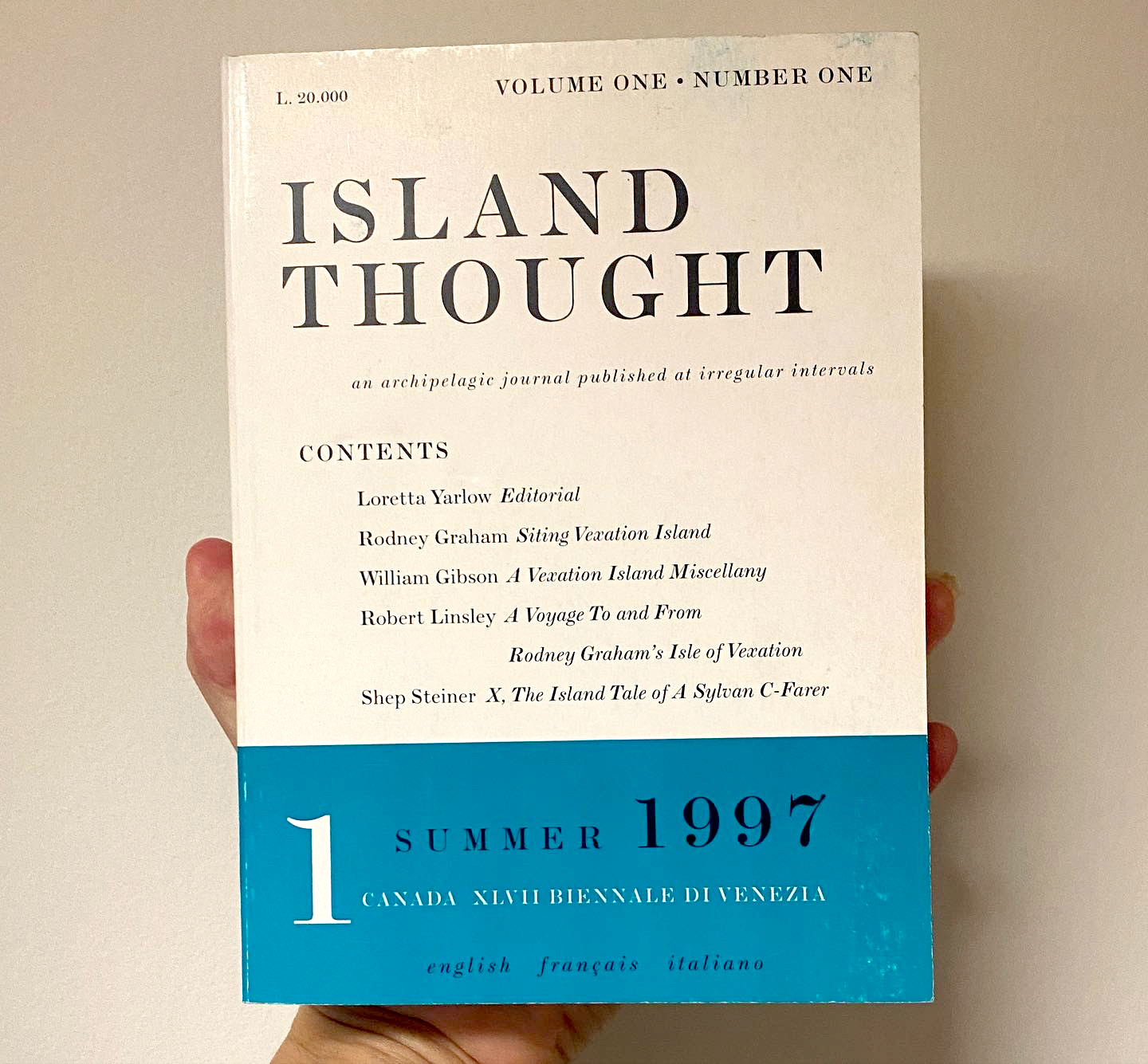 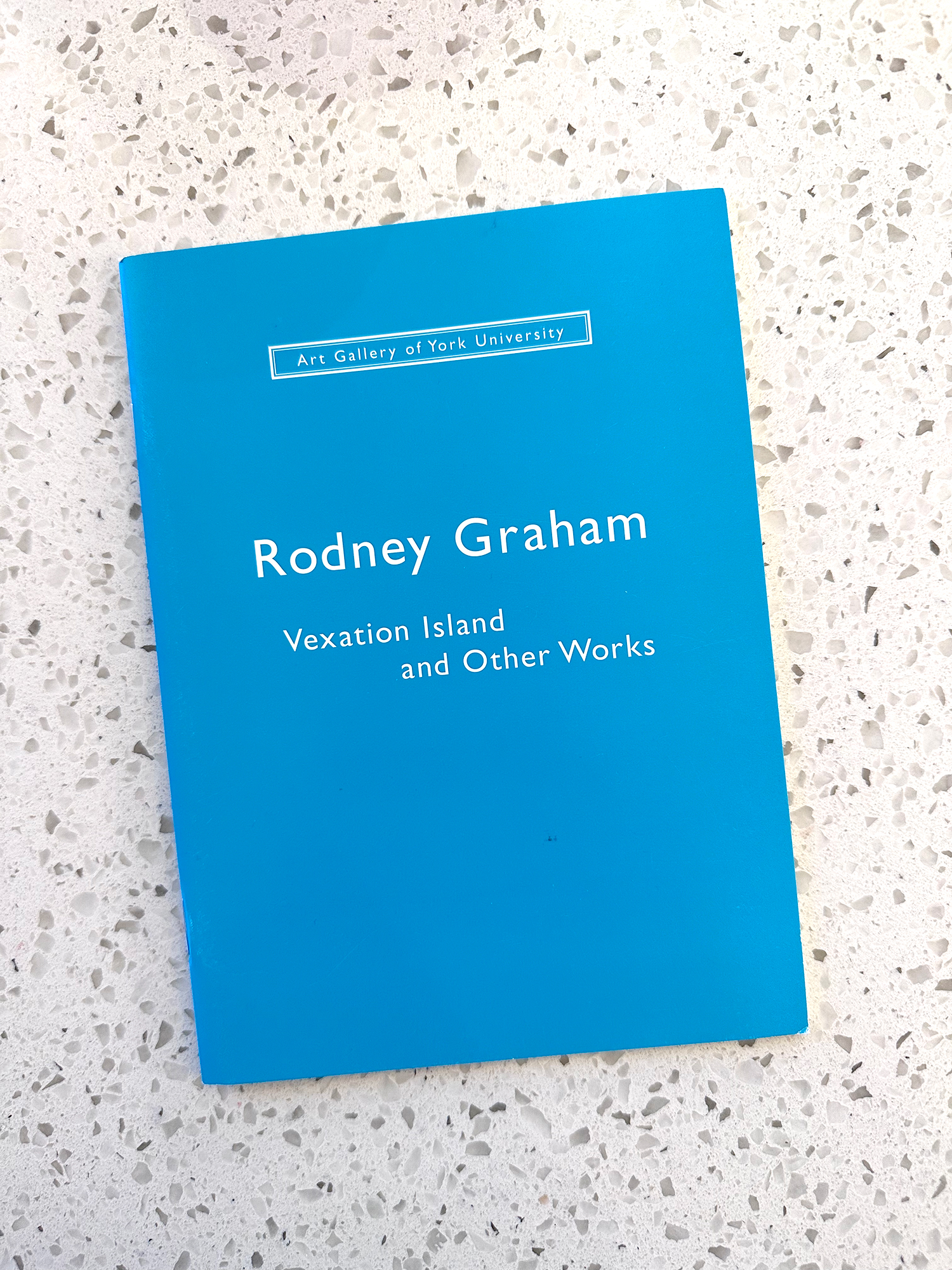 Rodney Graham in costume in a still from Vexation Island

In 2004, he won the Gershon Iskowitz Prize, and in 2006, the Kurt Schwitters Prize. The Audain Prize for lifetime achievement followed in 2011. Then in 2016, Graham was made an Officer of the Order of Canada for his many contributions to contemporary art. His legacy lives on, not just at York, but in cities such as Vancouver, where his Spinning Chandelier, a kinetic sculpture hanging from the Granville Bridge since 2020, swirls in a blaze of glory. No matter what the medium, the work bewilders and bemuses, startling all who gaze upon it. “I just wasn’t interested in straight photography,” Graham once said. “I felt I had to do something different, something more conceptual.” Something, in other words, that keeps you wondering and asking, what’s up?  ■

An engaging new showcase for the AGYU Collection

Trailblazing first-generation York students share their experiences with equity, community and their peers in a new book