A new book sheds light on how ­immigration supports multiculturalism

To gain a better understanding of immigration, national identity and multiculturalism in one of the most important receiving societies in the Americas, York University grad Benjamin Bryce (MA ’08, PhD ’13) recently published To Belong in Buenos Aires (Stanford University Press), which looks at German migration to Argentina from Germany in the late 19th and early 20th centuries. 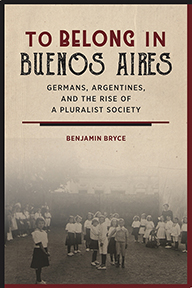 The 248-page book highlights the importance of children and ideas about belonging in driving the formation of immigrant communities.

“The ethnic institutions that made communities, and that maintained cultural difference in Buenos Aires over a long period of time, paradoxically worked to integrate immigrants into Argentine society,” says Bryce, whose interest in the topic was sparked by a York graduate exchange to the Freie Universität in Berlin, which he took as a master’s student in 2008.

Today an assistant professor of history at the University of Northern British Columbia, Bryce wrote the book for other scholars and academic researchers, but believes the subject matter would appeal to anyone interested in any discussion about immigration to Latin America, or global multiculturalism in general.

Canadians, he says, would especially find the subject matter relevant.

“Argentina attracted more immigrants than Canada between the 1860s and the 1960s. I think a lot can be learned about past examples of multicultural societies in forming our own. Discussions about the dangers or problems of immigration that one found in Argentina a hundred years ago are similar to those that one finds in North America and Europe today.”

Once upon a time, the Argentine people dreaded the influx of German and other immigrants, regarding the newcomers as culturally different. Slowly, and over time, the groups meshed and merged to form a vibrant pluralistic society. Hatred of the other was clearly misplaced.

By highlighting the importance of children and ideas about belonging in driving the formation of immigrant communities, Bryce provides plenty more historical examples to show “how things played out can help placate fears about cultural difference.”