At first glance, a pile of dirty laundry might not look like a source of fresh ideas for an ­academic with a deep-rooted interest in social justice. But when Pat Armstrong started rummaging through sacks of sweaters, socks and silken nothings awaiting washing in nursing homes scattered across six western world countries, the Distinguished Research Professor in the Department of Sociology at York University uncovered ­layers upon layers of hidden sociological meaning behind garments belonging to their elderly residents.

“Clothes are important to creating a sense of self, and a sense of dignity, and so how you care for them matters,” says Armstrong, who has published a book on the topic following eight years of international research into the importance of laundry.

Co-authored with York PhD graduate Suzanne Day, Wash, Wear, and Care (McGill-Queen’s University Press) argues that clothing is more than just fashion. It exerts a critical influence on the morale and health of senior citizens living in institutional residences.

For the occupants of old people’s homes, clothes often represent the last shreds of self-respect to which the elderly cling after everything else in their lives has shrivelled and died. Clothes express not just ideas about identity, but often existence itself. Armstrong learned this firsthand while leading an international team of ethnographic researchers into nursing homes across Canada, Sweden, Norway, Germany, the U.S. and the U.K.

Far from observing their subjects from the comfort of the ivory tower, Armstrong and her fellow scholars divided themselves into groups of between 12 and 16 members who took turns doing shift work inside the facilities within their purview. They did domestic labour, sweeping floors and serving meals, while keeping their eyes glued on the ever-pervasive piles of laundry that constituted the bulk of their primary research. The researchers didn’t just observe; they interviewed staff as well as residents and their family members about the handling of clothing within an institutional setting. They wanted to understand how a seemingly mundane task as doing the laundry can profoundly affect the physical and psychological makeup of the elderly in care. 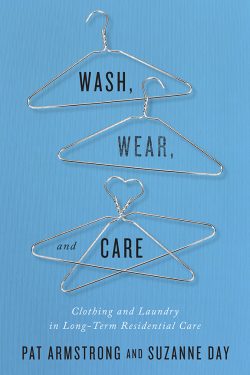 “It starts when we tell them we have to label their clothes once they enter a long-term care facility, and then it escalates when we tell them that only certain kinds of clothes will be allowed in, those made of synthetic and made to withstand the boiling temperatures of industrialized laundry,” Armstrong says. “It’s usually the first time a person who has entered a home feels a loss of identity, and the affects can be devastating.”

Even an old sweater is precious in the context of an assisted living facility where a resident’s autonomy becomes as stripped down as their bedding. Parting with a cherished article of clothing, even for such a routine task as laundry, can be emotionally fraught, with an elderly person growing increasingly anxious while waiting for the garment to be returned to them, safe and sound. Their fears are usually justified. “We heard about lost sweaters everywhere we went,” says Armstrong, dressed in one today, along with jeans and a sensible pair of shoes, while sitting inside her Kaneff Tower office at York University. “And when you’ve lost your clothes, you’ve lost your sense of self, and everything of meaning to you.”

Miranda Ferrier, president of the Canadian Support Workers Association, knows firsthand the importance of clothing to senior residents of long-term care facilities. “I took care of one lady who knitted a red sweater for herself before she went arthritic and it was her crowning achievement and then the sweater went missing and she fell into a deep depression. Yes, over a sweater. But the point is it had incredible value to her,” says Ferrier who, while not a part of Armstrong’s study, agrees with its findings.

“Clothing might seem like a little thing to a personal support worker, especially when the PSW has 15 residents to take care of, but the little things are important,” Ferrier continues. “It all plays to quality of care. You’ve got to look at the big picture.”

Nathan Herrmann, the Richard Lewar Chair in Geriatric Psychiatry at Sunnybrook Health Sciences Centre and the University of Toronto, agrees. “I am the psychiatric consultant for the Veterans Centre at Sunnybrook, a long-term care facility, and there is no question about how important clothing is to the residents. There are many examples of 90-year-old male residents who must be dressed in a jacket and tie on a daily basis, even if they are in a wheelchair, and that’s because it is very important for their self-esteem and self-identity to have their appearance and their clothing look good and be reflective of their previous accomplishments and cultural background,” Dr. Herrmann says.

“They want this sense of self through clothing so as not to look like patients. These long-term care facilities are their homes, where they hope to have a good quality of life. Clothes really do make the man or woman.”

Given this expert perspective, it would stand to reason that laundry would rate high on a list of priorities for those working in long-term care facilities. But Armstrong, cross-­appointed to the departments of Global Political Studies and Gender and Women’s Studies at York, says that is simply not the case.

Her research found that most long-term care facilities, with few exceptions, tend to overlook the profound impact laundry has on the lives of senior citizens living in their care. As she writes in her book, “Dirty, wrinkled, lost or shrunken clothing can undermine both health and self-respect, not to mention upset both the resident and their family.” As well, the handling of laundry affects the overall experience of a home for workers and residents alike. “Hallways crammed with carts of soiled linens look institutional and emit odours that permeate every room.”

Additional problems can occur when laundry is contracted out. Who takes clothes out of the cupboards and who puts them back? It’s an open question.

There are many examples of 90-year-old male residents who must be dressed in a jacket and tie on a daily basis, even if they are in a wheelchair

Armstrong and her team observed many instances where clothes were taken in bulk from people’s rooms and returned in a similar anonymous manner, hung on racks in communal hallways for anyone and everyone to handle. “You have to remember there’s often cases of dementia in these homes and some residents will treat it like Walmart and just pull clothes off the rack, regardless of who they belong to. A big difference would be to organize it in such a way that people feel their privacy is respected. But in Canada, as we found, this often doesn’t happen.”

And why is that?

“Not much has been written on the subject before,” says Armstrong, explaining why she felt a need to devote the past eight years of her academic career to scrubbing away at the ignorance that has allowed the grim conditions in nursing homes to fester.

“I think there has been a tendency to treat these places as medical institutions, and so the focus has tended to be on measuring falls and the number of meds. The quality of life stuff just doesn’t get attention,” she adds. “But clothes and all that go with them are critical to quality of life. Our objective is to put life into years, and not years into life.”

Guided by feminist political economy, and informed by theories of care, Armstrong hopes her jointly authored book will effect real change. The future, she says, depends on it.

“If we can’t treat the most vulnerable with dignity then what good is our society?”