It’s called A Little History of Canada. But the sweep of the story makes it feel as luxuriantly voluminous as a Prairie wheat field

Originally published in 2004, A Little History of Canada (Oxford University Press) sold 15,000 copies during its first print run, justifying a second print in 2011. A third paperback edition came out this past July, at the peak of the year-long Canada 150 celebrations, becoming an instant bestseller. 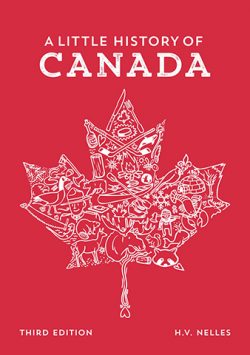 There’s a reason the book has legs.

With more than 14,000 years crammed into just over 200 pages, it is a concise and compact read. It’s also exceedingly well-written, and even – gasp! – entertaining.
“It’s not an academic book,” says H.V. (a.k.a. Viv) Nelles, a distinguished research professor emeritus at York University and two-time recipient of the Sir John A. Macdonald Prize of the Canadian Historical Association, a prestigious peer award honouring the best book on Canadian history.

“It is structured differently from other books that are already out there.”

That structure is not unlike like Niagara Falls – surging forward to make a big splash.

The narrative flows from Nelles’ central thesis, which is that Canada is a country in a constant state of flux. With every change the past is not obliterated, but more built upon to create a new identity composed of many and diverse parts.

“Canada is a story of transitions,” says Nelles, whose name graces the annual Melville-Nelles-Hoffmann Lecture in Environmental History, whose next instalment takes place on campus in March. “It’s always a different Canada from the one that came before.” Changing, adapting, realigning in response to new and developing realities.

Serving as a metaphor for this fluid interpretation of Canadian history is the transformation mask of Canada’s Pacific coast Indigenous peoples, a carved artifact with movable slats revealing the sun, the moon, a killer whale or a human face, depending on the pull on hidden strings.

The images melt into each other, with fragments of one face sometimes featuring in the face of another. Like the mask, “Canadian history is thus a composite, the latest in a series of metamorphoses, but it carries forward living attributes of its previous incarnations,” Nelles writes.

Accordingly, you read it in sections before pronouncing the whole thing extraordinary – all of Canada, in the palm of your hand.

A city comes out

When the FIFA World Cup comes to Toronto in 2026, York will be ready to kick