On the shelf: mushrooms by the can
Familiar fungi: The classic button mushroom
Rotem petranker: The therapeutic potential of hallucinogens
Myra arshad: The next frontier in biodegradable materials

The Magic of Mushrooms

It’s a shroom boom – boosting immunity, sustainability and the hopes of the planet

Have you ever noticed how, after a rainfall, mushrooms will appear fully formed as if out of nowhere? What was previously just a patch of earth or a rotting log – to name two familiar fungi incubators – is suddenly clustered with seemingly alien beings with slender stalks for bodies and bald caps for heads.

Easily toppled and decapitated (not to mention curious to look at), mushrooms appear to be fragile but are actually quite robust, capable of pushing through decomposing materials with astonishing speed and strength, their silken structures unscathed by the Herculean effort.

One of the distinct wonders of the natural world, mushrooms are not unlike the mythical phoenix rising from the ashes in a continual act of self-regeneration. Even in the course of the coronavirus pandemic, they keep on asserting themselves as a mysteriously unstoppable life force.

Fungi are amazing organisms; they have more in common with animals than they do plants

“FUNGI ARE ABSOLUTELY AMAZING organisms; they have more in common with animals than they do plants,” says York University Professor Michael Brown, a Canada Research Chair in computer vision and amateur mycologist (or mushroom expert) who forages for mushrooms in the wild.

“What we think of as mushrooms are only the fruiting body of the larger fungi organism. Most of the fungi is in the ground or tree as the mycelium,” continues Brown, a member of the Mycological Society of Toronto, an organization whose stated goal is to stimulate public interest in and appreciation of fungi and their role in nature.

“The mycelium is the pale mass that looks like a network of connections, much like a brain. This is the part that often works in harmony with plant roots to exchange nutrients. I personally just find them fascinating.”

That fascination is spreading as mushrooms – in all their wondrous variety – emerge as an unexpected pandemic lifestyle trend. During lockdown, people have taken to foraging for edible mushrooms out of doors, as Brown and his fellow mycologists frequently do. They are also, in increasing numbers, growing them at home using kits supplied by the likes of Wylie Mycologicals Ltd. Until recently, Wylie Mycologicals would ship mushroom-growing kits to customers across the country from their location in the Bruce Peninsula, north of Owen Sound.

The family-run business was founded by Bill Wylie, a chartered accountant, and his wife, York grad Micky Wylie (BA ’71), a legal librarian by profession. The couple started selling specialty mushroom grow-blocks to commercial mushroom growers in Ontario, Quebec and the Maritimes in the 1990s, later expanding into local and inter-provincial nurseries, in addition to Loblaws and related supermarkets, due to demand for their organic products.

Their home growing kits – which consisted of sterilized and inoculated spawn-run red oak sawdust needing only a twice-daily misting of water to fruit – evolved out of store demos driven by consumer curiosity. The DIY kits have long been popular with the public – “People are genuinely amazed by what seems to be a mysterious growing process happening before their eyes,” Micky Wylie explains – but demand has surged during COVID-19. Sales are up 10 to 15 per cent over the year. (Unfortunately, these consumer sales were ultimately not enough to offset the loss of sales to restaurants forced to closed during the pandemic, and this past spring, the company ceased its operations.) 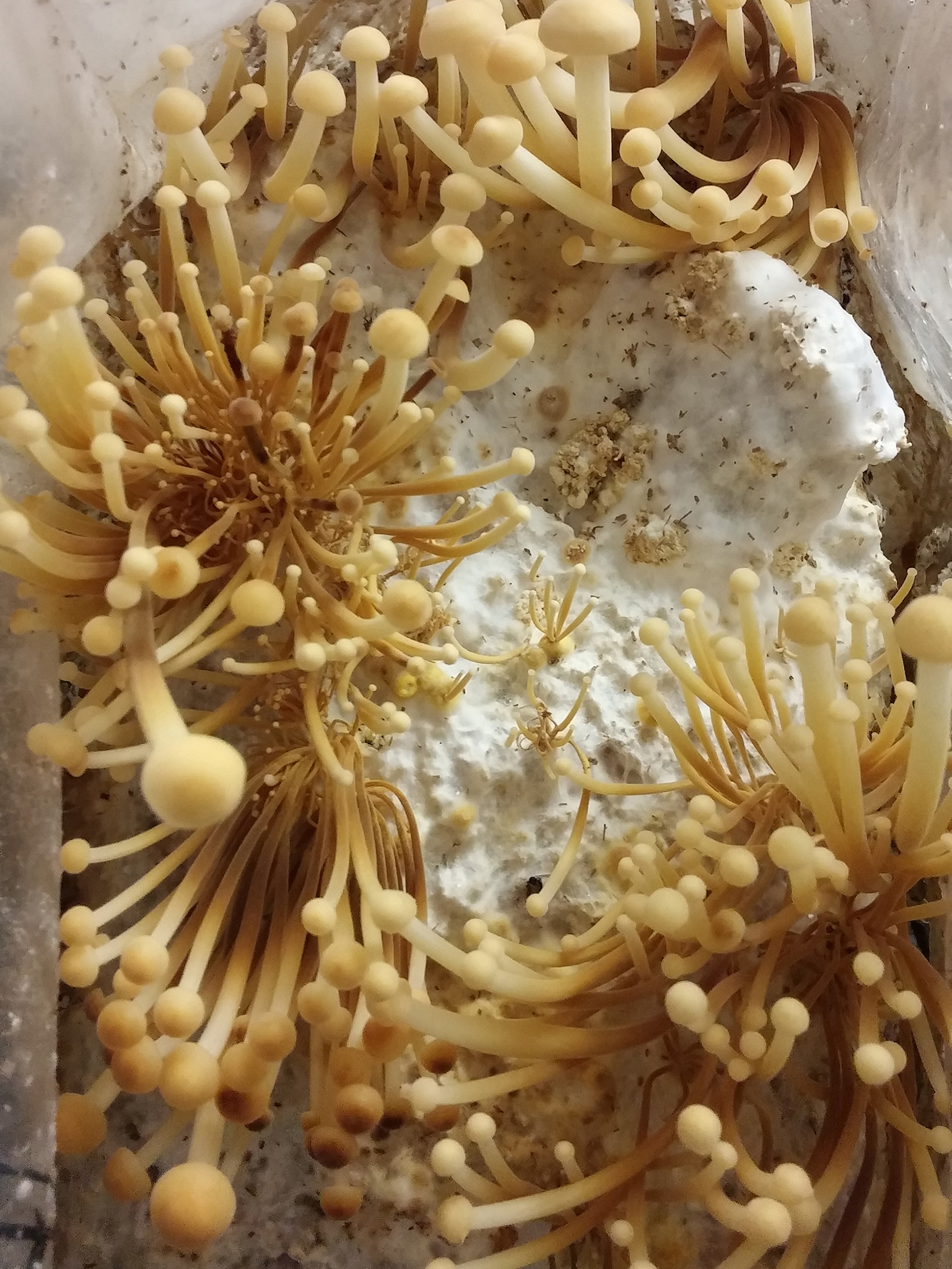 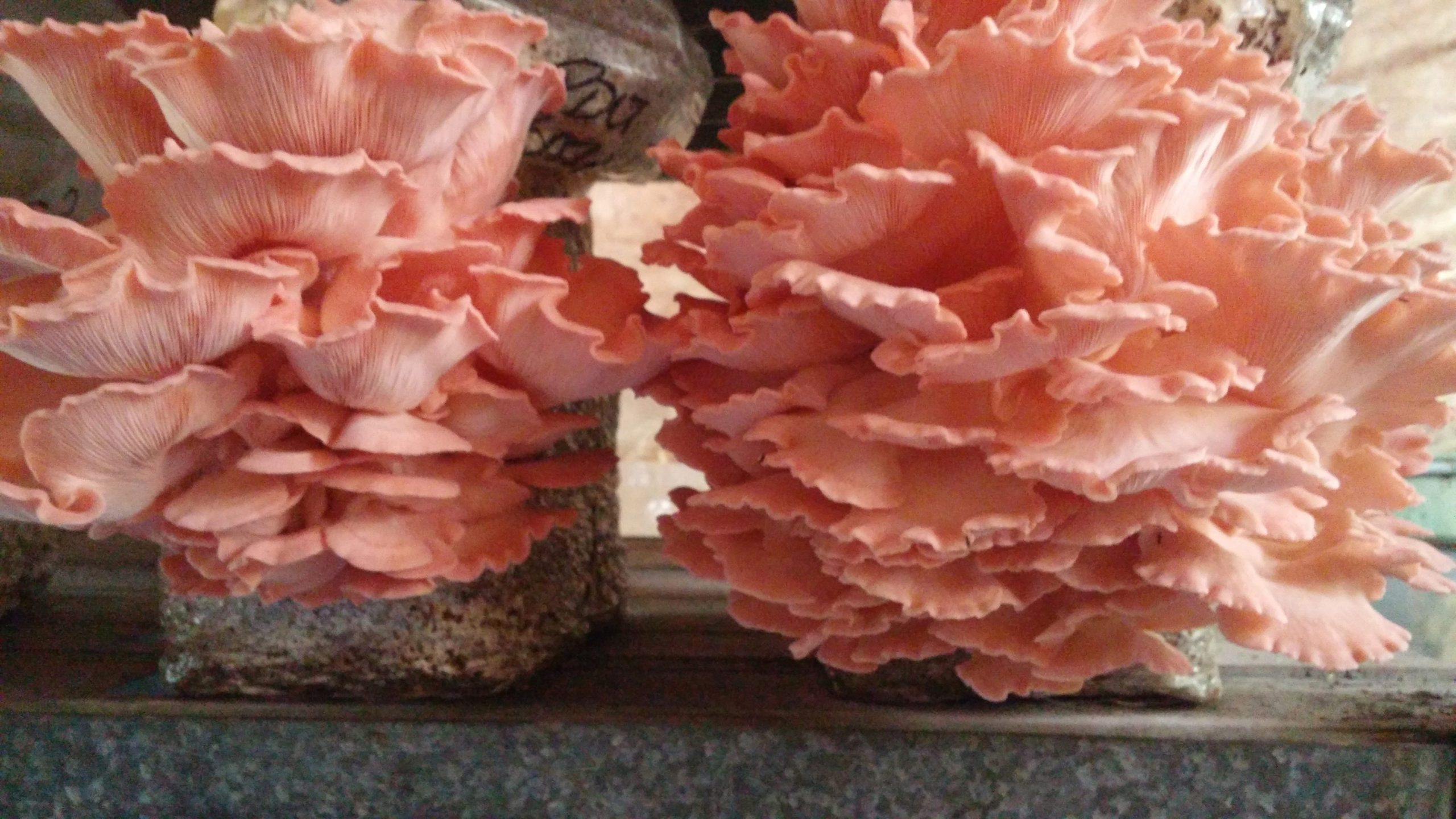 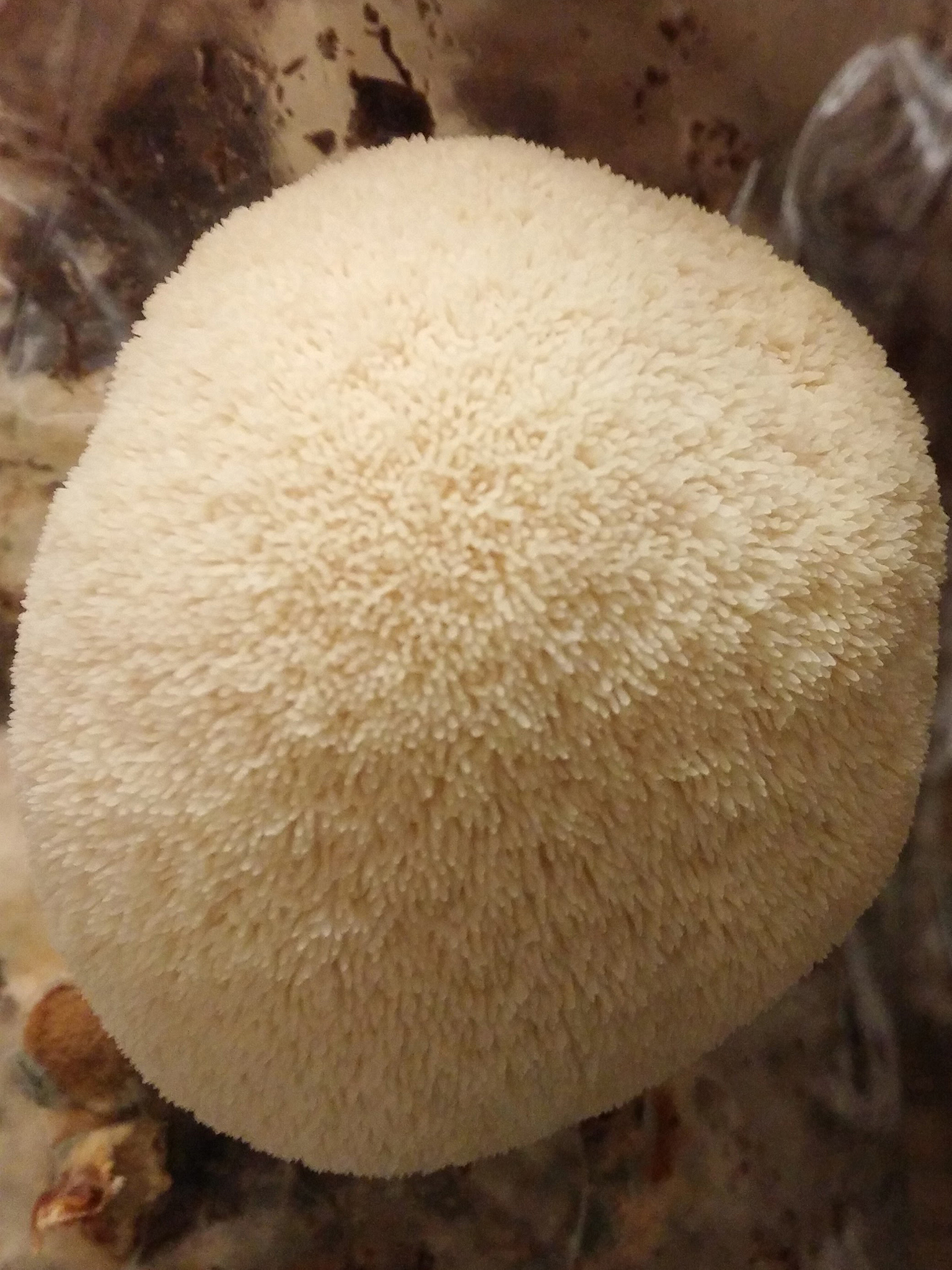 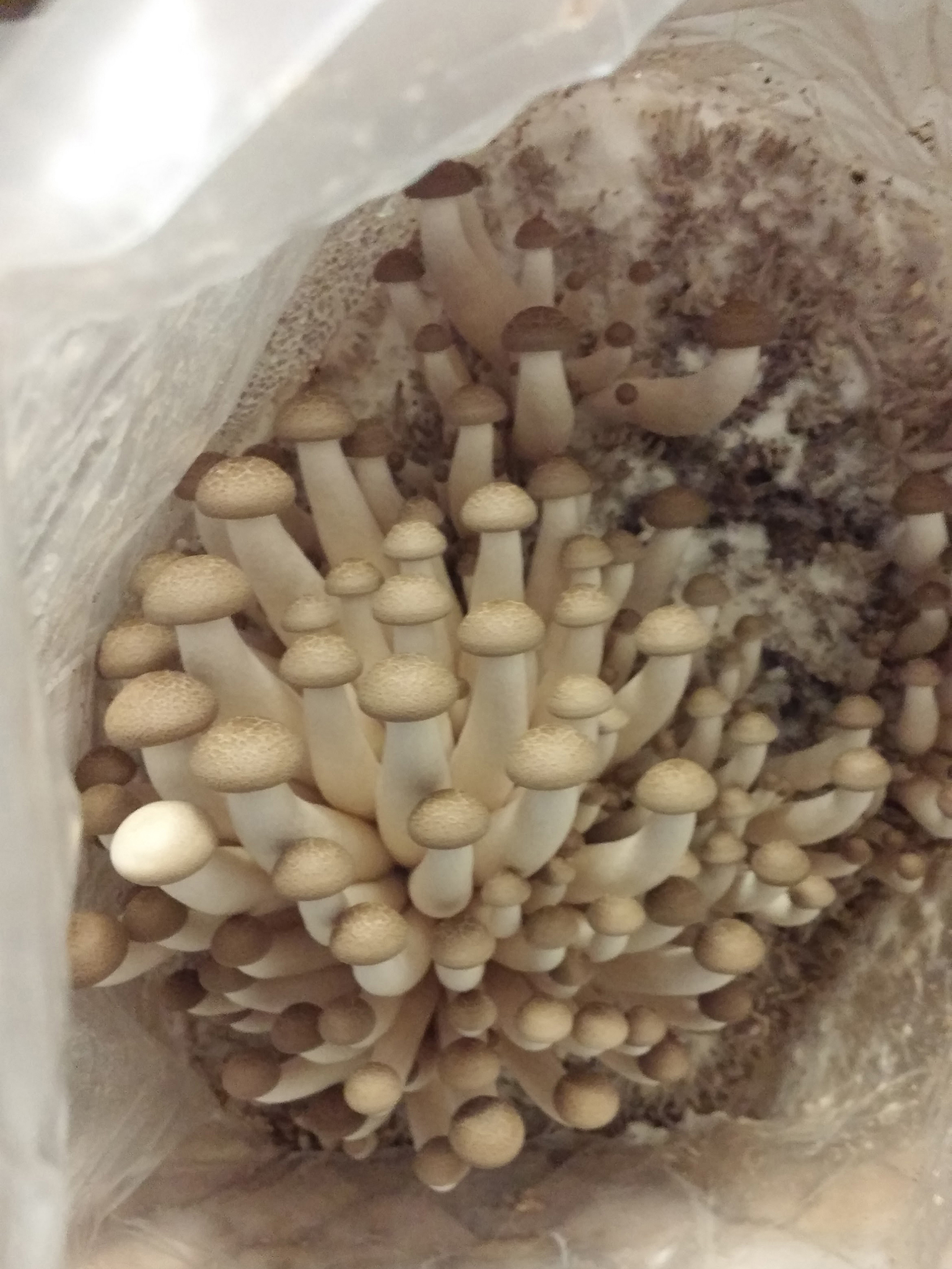 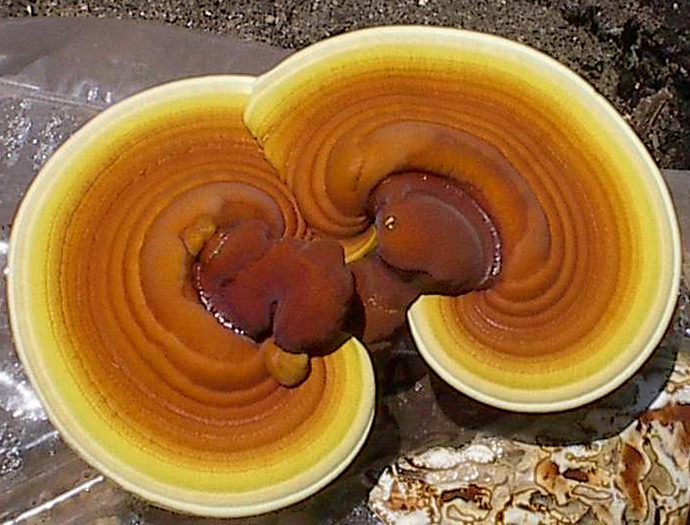 “Mushrooms put on a good show,” Wylie continues. “They grow very quickly, so what appears as an infant sprout in the morning may be ready to pick by mid-afternoon to be served at dinner.”

BEYOND FRESHNESS, homegrown mushrooms promise immunity-building health benefits, something our disease-ravaged society has been craving during the course of the pandemic. Mushrooms are nature’s unassuming healers; many varieties supply the body with much-needed vitamins and minerals, including selenium, potassium, calcium and – when infused with sunlight – vitamin D. Protein and endurance-enhancing carbohydrates are also part of what Wylie calls “the cornucopia of life offered by versatile specialty mushrooms.”

Nowadays, that cornucopia is overflowing with mushrooms in a variety of forms and formulations. Functional mushrooms, a description applied to certain types of fungi with medicinal (and not just nutritional) value, are another lifestyle trend gaining traction in the pandemic. Celebrities like Gwyneth Paltrow and Mischa Barton publicly endorse the healing powers of mushrooms, helping to raise their profile (and popularity) as a readily accessible natural health treatment.

Scientific evidence is still pending on whether or not putting powdered mushroom in your morning smoothie or coffee will delay the aging process and cure cancer, as some medicinal mushroom advocates proclaim. But other studies show that functional mushrooms reduce inflammation, lower blood pressure, manage weight, boost mental clarity and minimize the risks of certain chronic diseases. These findings and more are likely why the global mushroom market is currently on the upswing. According to a recent Business Wire report, the market for edible and non-edible mushrooms combined is forecasted to grow from its current value of US$54 billion to US$86 billion by 2026.

York alum Ben Nikolaevsky (BA ’91), whose Pure Extracts Technologies company in British Columbia processes functional mushrooms for consumer use, says that the market is being driven by the health-promoting benefits of medicinal mushrooms: “The functional mushroom wellness market is experiencing robust sales as many consumers are trying to boost their immune systems in light of the COVID-19 pandemic.”

They also appear to increase creativity, promote healthier lifestyles and give people a sense of meaning in their lives

More products are expected to follow once the company builds out its mushroom extraction facility north of Whistler, in the Rocky Mountains. They will include manufactured psilocybin, a hallucinogenic derivative of functional mushrooms (colloquially known as magic mushrooms) to be made available as oral tablets, capsules and a nasal gel developed for investigation purposes. Nikolaevsky is currently working with scientific researchers to study the efficacy of psilocybin as a treatment for common forms of mental illness. His company has already submitted an application to Health Canada for future sales.

Rotem Petranker (MA ’18), a clinical psychology PhD student at York University who is leading an international research team in examining the health benefits of psilocybin-containing mushrooms, says that medical science (psychiatry, psychology, pharmacology and the like) has a real interest in the therapeutic potential of hallucinogens.

“Psychedelics, and psilocybin in particular, show a lot of promise for treating anxiety, depression and OCD, and may even be effective for other disorders such as eating disorders and PTSD. On the flourishing side, they also appear to increase creativity, promote healthier lifestyles and give people a sense of meaning in their lives,” says Petranker, whose main research interests are sustained attention, emotional regulation and creativity, all of which can potentially be affected by microdosing psychedelics. “But there is much that remains unknown about these substances,” he cautions, “and so more research should be done before we embrace them wholesale.”

JUST AS THEY CAN TREAT PEOPLE, mushrooms can also tend to the woes of the planet, or so mycophiles – those with a positive relationship with mushrooms – believe. Decomposers that feed on dead organic material, fungi can clean up sawdust and other debris on building construction sites where mushrooms, not incidentally, are also being used to make biodegradable building materials like floor tiles, mouldable concrete and non-toxic replacement glues and insulation. Studies are ongoing as to how fungi can be applied to biohazard sites, where their ability to eat through and absorb environmental toxins is making mushrooms a significant future player in the growing bioremediation industry. Some varieties are also known to eat through plastics, insecticides and other pollutants, making them an ally in the war against human-made waste in oceans as well.

Elsewhere, strides are being made with mushrooms in fashion, one of the most polluting of all industries, where sustainability is becoming a much-coveted value. Earlier this year, French luxury leather goods brand Hermès announced that it would incorporate a mushroom-derived material into one of its high-end travel bags by year’s end. Amber-coloured Sylvania, created in a lab by California-based startup MycoWorks, is made from the complex network of hardy threads found in the mycelium root structure. The resulting product is as durable and supple as calfskin but without the environmental impact of traditional leather manufacturing.

British designer Stella McCartney is also presently experimenting with fungal leathers, having recently produced a prototype of a mushroom-based black bustier with a matching pair of leggings made from a mycelium leather created by Bolt Threads. Adidas, LuluLemon and Gucci’s parent company Kering (which owns Saint Laurent and Balenciaga, among other high-end European fashion brands) are also said to have signed up to use Mylo, as the vegan unleather is called, in their own future collections. Mushrooms’ style cred extends to avant-grade designer Iris van Herpen, whose 2021 Spring/Summer couture collection features chanterelle-shaped garments inspired by her reading of biologist Merlin Sheldrake’s 2020 book Entangled Life: How Fungi Make Our Worlds, according to Vogue magazine.

To Myra Arshad (BBA ’18), co-founder and CEO of Alt Tex, a Toronto-based startup that has found a way to convert unused industrial food waste into a biodegradable biofibre for textile use, mushrooms and other plant-based materials represent the next frontier in sustainable fashion.

“Humans have been using very linear materials for centuries now – that is, materials that are not designed to be recycled or biodegraded – and because of that, plus the speed with which we are manufacturing fashionable clothing, we’ve ended up amassing so much waste on this planet that we just don’t have enough space for it,” says Arshad, a 25-year-old Schulich School of Business graduate recently identified as one to watch by the Forum of Women Entrepreneurs, a national organization based in Vancouver.

“To solve the problem, we really need to start thinking about using more food-based materials that can better support the survival of the planet. Utilizing food waste, as we do at Alt Tex, or the root systems of mushrooms, as other companies do, will conserve the ecosystem. It’s a novel process that, by creating biodegradable fabrics, will help keep fashion out of landfills.”

Until that day arrives, mushrooms will do what they’ve always done – appear out of nowhere after a rainfall as a visible reminder of the secret powers of nature. “There are a large variety of edible and non-edible mushrooms that you can forage,” says Prof. Brown, whose preferred  mushroom-hunting grounds are north of Toronto, in the wilds of Muskoka. “Of course, you should never eat a mushroom without having expert knowledge,” he adds, “because many non-edibles can be deadly.”

Which only adds to their mystery.  ■

Supporting mental health at a time of crisis