Let’s pause for a moment to consider the zebra mussel, a hardy little bivalve blamed for damaging water treatment plants, causing lake algae to bloom and cutting the feet of unwitting swimmers. Or the purple loosestrife, a pretty flower gracing the nearby shoreline. Its rap sheet includes disrupting water flow in rivers, and crowding out additional flora. Both are invasive species, said to be wreaking havoc on our home and native land. Or are they?

GLENDON CONSERVATION BIOLOGIST RADU GUIASU argues that invasive species can have positive effects on the environment – and that efforts to control them often do more harm than good.

“My main problem as a scientist is that this has become like a religion, in that it’s no longer data-based – if it ever was,” says the author of Non-Native Species and Their Role in the Environment, a 2016 book urging a more measured view of Canada’s so-called notorious invaders. 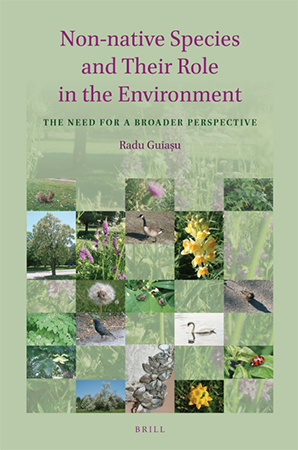 But efforts to control zebra mussels and other invasives have simply not been very successful. And those that are have tended to have a deleterious effect on the environment. Poisons, cautions Guiasu, “are indiscriminate. They kill everything, all the fish, not just the targeted species. Same with plants and herbicides; they get into the soil, affect the groundwater and kill other plants. These programs can be destructive, as well as expensive, and much of the time they’re futile because the targeted species is the one that’s tough and resourceful.”

Addressing the problem is the growing field of invasion biology, which looks at the complex factors behind the presence of invasive species in Canadians lands and waters. A leading proponent of the discipline is York University biologist Sapna Sharma, who sees invasive species as the natural bedfellows of globalization, climate change and urban development. “Globalization is one of the important drivers bringing non-native species into previously separate ecosystems through trade and travel,” Sharma says, adding that “invasive species are always bad for terrestrial and aquatic environments.”

We know that zebra mussels aren’t native to Canadian lakes; they hitched a ride here on foreign boats, sometime around the late 1980s. But species don’t have to originate elsewhere to qualify as invasive, points out York environmental studies Professor Jennifer Foster. The Sassafras trees in Toronto’s High Park, for instance, are a North American species that were reintroduced to the area a few years ago, are today generally seen as a boon and not a nuisance.

Some plants and animals most identified with a given place are secret immigrants. Tulips, for example, are not actually Dutch

Often it’s hard to tell when a given species is native and when it isn’t. Common in Toronto, for example, the black locust tree is sometimes reviled as a kind of pushy American import that grows fast and outcompetes some delicate local trees. Yet Guiasu says that fossil records show it was present in Canada before the last Ice Age.

He also points out that some plants and animals most identified with a given place are secret immigrants. Tulips, for example, are not actually Dutch; they originated in Central Asia. And several decades ago, when an epidemic of Dutch elm disease threatened Canada’s beloved native sugar maples, a host of sturdy Norwegian maples were planted to replace them. These have done so well that the Bank of Canada – mistakenly, it would seem – placed a five-pointed Norwegian maple leaf on the new polymer bills it issued four years ago.

Non-native species, even when invasive, can bring many advantages to an ecosystem. Take purple loosestrife, for instance, a wetland plant first brought by European settlers in the 19th century. “It’s much demonized. It’s on the 100 worst invasive alien species list put out by the International Union for Conservation of Nature. But I could find no credible scientific evidence that it’s a problem, yet the propaganda continues,” Guiasu says. In his opinion, the flower offers food and shelter for a variety of birds and other animals. With its gorgeous colour, it’s also esthetically pleasing.

Yet, he won’t go so far as to say invasives are all good – some appear to be, in fact, both good-news and bad-news stories. City pigeons are roundly hated as disease carriers that infest parks and damage property, but they also provide sustenance for more valued, threatened birds such as the peregrine falcon and red-tailed hawk. Even those nasty zebra mussels can bring some good tidings. They absorb toxins and cleanse water, and have been credited with a rise in certain fish populations, even as they destroy others.

But Sharma cautions that zebra mussels, as well as other invasive lake species, are also a thoroughly terrible nuisance. She believes strong language is necessary to call attention to the grave problems they present. There are more things to fear in the Canadian lakes, imported from elsewhere. They include the sea lamprey, a slimy mini-monster that is thought to have made its way from the ocean to the Great Lakes via the shipping canal system. It attaches itself to native fish such as trout, salmon or walleye, sucking out their entrails and devastating lake populations in the process. There’s also the Asian carp, known to jump three metres out of the water and slap unsuspecting boaters in the face, sometimes breaking bones. These gluttons devour plankton and other food sources that native fish depend on. Then there is the snakehead, a huge invader that can breathe and wriggle around on land; National Geographic calls the phenomenon “Fishzilla.”

In cases like these, there certainly seems a call for control programs. Native fish populations are threatened in the Great Lakes, and Sharma says zebra mussels alone cost the American economy $1 billion a year. Guiasu says his research shows that figure to be lower and declining over time, though he does not deny that zebra mussels (for example) are harmful.

But Foster thinks that if we spent too much time curbing invasives, we might be missing out on the introduction of some terrific new wildlife. Her current research centres on what she sees as one great benefit of such plants: their ability to transform the abandoned industrial landscapes of cities, creating beautiful new ecosystems in the process.

In scarred urban settings, “we find that the only species that can realistically establish themselves are invasive,” she says. “If you think of old dumps or rail lines, old factories that are abandoned – really impressive novel ecologies pop up in these places.”

Invasive plants can stabilize soil, which in turn creates a new livable habitat for mammals such as bats or birds. Here in Toronto, the Leslie Street Spit offers a perfect example: Designed as a landfill, it has accidentally become a significant area for bird watchers. “It wouldn’t be what it is without species invasion,” says Foster. “It’s a really good example of an invadable landscape.”

It’s that emphasis – on landscapes, instead of the species that inhabit them – that she thinks is important. Plants and animals can be loathed, killed and culled, but they certainly had no malicious intentions in coming here. Some were intentionally brought to Canada by humans, some drifted here accidentally. But they can only survive in conditions we humans create for them: Kill the wildlife, and the invadable conditions will still exist.

We resent species for being successful because we are used to being all-powerful and making the executive decisions about nature. And any species that challenges us by being successful without our permission, we have to control

Climate change is a perfect example of how species migration occurs. Where once the Virginia opossum was only found in the southern United States, it has, as the climate has heated up, now become a mainstay in the backyards of Toronto. In 2015, then-councillor Rob Ford described the new arrival as “vicious” in a public speech, but wildlife experts countered that it couldn’t be more harmless.

Growing seasons, too, have been extended due to climate change; longer springs give invasive species a head start on outcompeting less hardy types. The bottom line is that eradicating some of these species means eradicating climate change itself – a desirable, but much taller, order.

Clearly, for a plant or animal to survive the harrowing experience of climate change, migration and re-establishment is a sign that it comes from strong and successful stock. Guiasu thinks we arbitrarily punish plants for their success, and we shouldn’t.

“We resent species for being successful because we are used to being all-powerful and making the executive decisions about nature. And any species that challenges us by being successful without our permission, we have to control.” He cites dandelions as an example: a bright and edible yellow flower that, because of its ubiquity, is everywhere disdained and doused with insecticide.

It’s clear that in some cases, that’s a good thing, and in others it isn’t. Whether we like it or not, though, nature is dynamic, and biodiversity has always used time as well as space to reveal itself. Guiasu thinks it’s a bit ironic that, back in Darwin’s Age of Discovery, imported species were once welcomed as wonderful new additions to the environment, instead of meddlers that invariably needed to be regarded with suspicion.

“As a child growing up in Eastern Europe,” he says, “I was so excited to go to botanical gardens and natural history museums. That’s what got me started in biology, just discovering this diversity of life around the world. Now, unfortunately, we’re trying to put nature back in its box. We often don’t have good reason to hate new species. And yet, we do.”

Fish Out of Water

The Magic of Mushrooms

It’s a shroom boom – boosting immunity, sustainability and the hopes of the planet

Women in the plant world are breaking ground

Pluto’s ice ridges may be similar to Earth’s